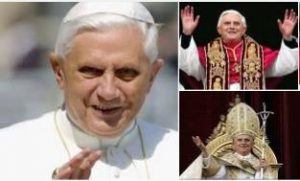 Benedict XVI, the 265th Pope, a position in which he serves dual roles as Sovereign of the Vatican City State and leader of the Catholic Church, has announced that he is resigning on February 28, 2013. As Pope, he is regarded as the successor of Saint Peter the Apostle. According to several sources, he has decided to step down from his position as Pope because of detioriating health.

Several are weighing in regarding the resignation of Pope XVI, including Cardinal Timothy Dolan of New York. He had this to say:

The Holy Father brought the tender heart of a pastor, the incisive mind of a scholar and the confidence of a soul united with His God in all he did. His resignation is but another sign of his great care for the Church. We are sad that he will be resigning but grateful for his eight years of selfless leadership as successor of St. Peter.

Though 78 when he elected pope in 2005, he set out to meet his people – and they were of all faiths – all over the world. He visited the religiously threatened – Jews, Muslims and Christians in the war-torn Middle East, the desperately poor in Africa, and the world’s youth gathered to meet him in Australia, Germany, Spain and Brazil.

He delighted our beloved United States of America when he visited Washington and New York in 2008. As a favored statesman he greeted notables at the White House. As a spiritual leader he led the Catholic community in prayer at Nationals Park, Yankee Stadium and St. Patrick’s Cathedral. As a pastor feeling pain in a stirring, private meeting at the Vatican nunciature in Washington, he brought a listening heart to victims of sexual abuse by clerics.

Pope Benedict often cited the significance of eternal truths and he warned of a dictatorship of relativism. Some values, such as human life, stand out above all others, he taught again and again. It is a message for eternity.

He unified Catholics and reached out to schismatic groups in hopes of drawing them back to the church. More unites us than divides us, he said by word and deed. That message is for eternity.

He spoke for the world’s poor when he visited them and wrote of equality among nations in his peace messages and encyclicals. He pleaded for a more equitable share of world resources and for a respect for God’s creation in nature.

Those who met him, heard him speak and read his clear, profound writings found themselves moved and changed. In all he said and did he urged people everywhere to know and have a personal encounter with Jesus Christ.

The occasion of his resignation stands as an important moment in our lives as citizens of the world. Our experience impels us to thank God for the gift of Pope Benedict. Our hope impels us to pray that the College of Cardinals under the inspiration of the Holy Spirit choose a worthy successor to meet the challenges present in today’s world.