On Friday, October 10, 2008, eighteen first grade children were taken to San Francisco City Hall to attend the wedding of their teacher and her lesbian partner. This was a school-sponsored trip to a gay wedding. 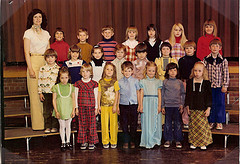 The recent article stated that “Nonetheless, the excursion offers Proposition 8 proponents fresh ammunition for their efforts to outlaw gay marriage in California, offering a real-life incident that echoes their recent television and radio ads.” You bet. First graders cannot make up their mind yet: and they certainly do not know what marriage is, gay marriage or not. To force these kids to attend this ceremony is just not right.

In first grade, you really do not know what marriage means: and thus you also do not have a choice on whether to go on a field trip to San Francisco City Hall to attend a gay wedding. This just goes to show that the California Supreme Court’s decision to legal same-sex marriage has real consequences.

The school sponsored the trip for the students, ages 5 and 6, took them away from their educational studies for this same-sex wedding.

“Taking children out of school for a same-sex wedding is not customary education. This is promoting same-sex marriage and indoctrinating young kids,” said Yes on 8-ProtectMarriage.com Campaign Co-Manager Frank Schubert. “I doubt the school has ever taken kids on a field trip to a traditional wedding,” Schubert said.

The school principal apparently told the San Francisco Chronicle that the field trip was “a teachable moment”. And the principal believes that it is perfectly appropriate for first graders to attend a same-sex wedding. Officials in other school districts disagree.

“It’s totally unreasonable that a first grade field trip would be to a same-sex wedding,” said Chip White, Press Secretary for Yes on 8. “This is overt indoctrination of children who are too young to understand it.” The trip underscores the Yes on 8 campaign’s message that unless Prop. 8 passes, children will be taught about same-sex marriage in public schools. “Not only can it happen, it has already happened,” White said.