According to a new Global Commercial Property Survey by RICS, the Royal Institution of Chartered Surveyors, collapsing oil prices have pulled oil rich countries into the global property malaise with capital values falling in emerging nations for the first time in the survey’s history. 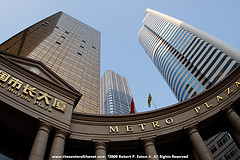 Commercial property in China has until recently remained relatively firm in the face of the global economic downturn. Most of the Chinese indicators have previously remained in positive territory, with both supply and demand holding up and expectations generally upbeat. However, the number of surveyors reporting a fall than a rise in capital values hit its worst level in the survey’s history. 72 percent more Chartered Surveyors reported a fall than a rise in capital values compared to a positive 18 percent in the previous quarter with surveyor sentiment for future rises also turning negative for the first time.

Rents fell across more than 90% of the countries surveyed with the greatest downward pressure occurring across parts of Asia. Taiwan, Hong Kong, Singapore and India were ranked in the bottom five for rental performance as the collapse in world trade has smashed export earnings and business confidence.

RICS’ Global Commercial Property Survey is a quarterly guide to the developing trends in the commercial property investment and occupier market. This edition details market conditions for the fourth quarter of 2008 based on information collected from leading international real estate organisations and local firms.

RICS (Royal Institution of Chartered Surveyors) is an independent professional body originally established in the UK by Royal Charter. Since 1868, RICS has been committed to setting and upholding the highest standards of excellence and integrity — providing impartial, authoritative advice on key issues affecting businesses and society. RICS is the worlds’ leading qualification when it comes to professional standards in land, property and construction. With over 140,000 members globally, RICS represents, regulates and promotes the work of property professionals throughout 146 countries.

The RICS Asia supports a network of over 9,000 individual professionals across the Asia region with an objective to help develop the property and construction markets in these countries, by introducing professional standards, best practice and international experience. It promotes RICS and its members as the natural advisors on all property matters. It also ensures that services and career development opportunities are provided to members.