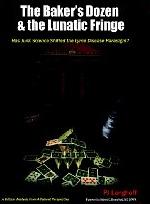 There’s a new book out titled “The Baker’s Dozen & the Lunatic Fringe: Has Junk Science Shifted the Lyme Disease Paradigm?” that reveals critical evidence about IDSA guidelines, science, and researchers that were examined in a recent Anti-Trust Investigation.

The IDSA Lyme disease guidelines are sometimes called “restrictive.” Misinterpretation may prevent diagnosis, treatment access, and insurance coverage. “I researched what I felt was an alarming trend — the denial of illness by those previously publishing that chronic Lyme existed and was serious, but whom now appear to deny this point of view,” said Langhoff. The IDSA guidelines for Lyme disease are promoted as the “standard of care.” Some physicians treating outside these so-called “standards” have found their medical licenses suspended or revoked. The International Lyme and Associated Diseases Society (ILADS), which includes some IDSA members, offers a markedly different set of guidelines affording chronically infected patients better options. “Chronic Lyme” is a form that the IDSA guidelines and some of its panelists are accused of dismissing. The IDSA guidelines state they are merely recommendations.

Some people feel adherence to the current IDSA guidelines are a significant impediment to wellness. “They are but one standard of care; written by those whose connections appear rife with conflicts of interest, and who may promote what many call ‘junk science,'” says Langhoff. The book explores diagnostics, pharmaceuticals, academic partnerships; patents and grant funding, government interests, the impact of the current paradigm on an ill population; and the need for reform. It calls for open access to long-term treatments, objectivity, and cooperative consensus in guidelines formation. The book also emphasizes the need for better patient representation in the legislative process than is currently afforded by only one medical society or advocacy group.

“The scientific community is not listening to patients, and these books offer a chance for our voices to be heard,” says PJ. The latest book was written after studying thousands of documents, mostly accessible via the Internet — an information resource often used by patients when seeking answers for health issues, for which they are heavily criticized. “We are not a hysterical bunch inventing illness by way of electronics, we seek answers. The idea that Lyme disease is not serious or chronic, that it is easily curable in all patients after antibiotics, or even that current diagnostics are accurate, is ridiculous,” says the author. “The book illustrates that current research easily refutes those holding a restrictive, minimalist viewpoint, and any guidelines that may help to promote that mindset.”

PJ Langhoff and her family have suffered with Lyme for two decades. She has written books and articles on tick-borne illness, including a book series called “It’s All In Your Head.” Langhoff is an independent writer, medical researcher, columnist, humorist, and owns a small press. She advocates for patients and physicians through her web sites and support group. The author received a grant from Turn The Corner Foundation, a non-profit advocacy group called “Turn the Corner”. Four years in the making, the book’s research was also shared during production of the award-winning Lyme disease documentary film, “Under Our Skin.”