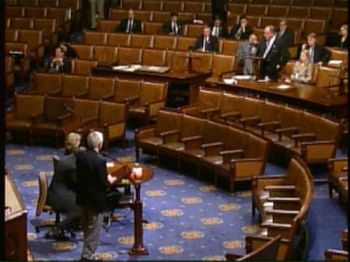 Something that has made me uncomfortable for years has been the partisanship that exists at all levels of government, especially, in Congress. Yes, I like the concept of a two party system to permit the government to have discussions between differing factions to, theoretically, enable Congress to make more thoughtful decisions and not to be a rubber stamp of the President.

This is a noble thought and has yielded many excellent results. However, when partisanship takes over in the legislative arena, good ideas (bills) have been prevented from becoming good laws for political reasons. Members of Congress should do what is good for America and not blindly follow a doctrine of objection, regardless of the value of a bill.

The concept of ‘doing what is right and best for our country’ is not a new concept. It is just that we have and are seeing good bills fail to be enacted into law or that the concessions necessary to obtain support from members of an opposing party so waters down a bill’s benefit that the bill no longer will be as effective. In addition, the excessive amount of time Congress requires to consider the bill greatly reduces Congress’ ability to consider additional bills during that session of Congress.

It is high time that more Americans sent signals to our officials that we want our local and federal governments’ actions to be based upon ‘what is best for America.’

I realize that to better their re-election campaigns, some governmental officials of both parties have made decisions based more upon campaign donations than upon what is best for America.

This thought has come to the surface for me because of the way Republicans in Congress have objected to the Obama Administration’s efforts to right our economy for now and for the long run. For example, the debate over the stimulus bill. With all of the flap by the Congressional Republicans that the bill doesn’t help business enough, it seems that about 40% of the benefit of the stimulus would be for businesses, which was a concession by the administration to obtain bi-partisan support for the legislation. When casting their votes for passage, Congressional Republicans still refused to support the stimulus bill – except for three members of the House.

Since Congressional Republicans objected so strongly to every suggestion from the administration, I wondered why they hadn’t presented suggestions for resolving the problems. Perhaps they didn’t know what else to do.