Take a look at the screen capture below, Google AdSense is clearly running drug rehab advertisements on a Whitney Houston blog post: 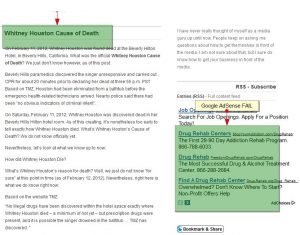 I was browsing a few websites and captured a Google AdSense ad on a blog post that is displaying these untimely and inappropriate ads. Apparently Google knows more about Whitney Houston’s death and the official Whitney Houston cause of death than anyone else. 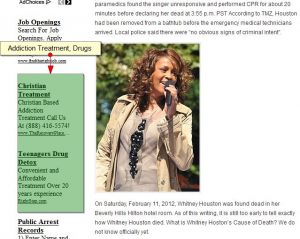 Really, Google, you say that you “do no evil”, but in this case, this is just not appropriate to be running drug-related and drug rehab advertisements along with content related to Whitney Houston.

What do you think? Is this appropriate?