Looks like we have a running mate for Barack Obama, the Democrat who is running for President of the United States. Barack Obama is expected to accept the nomination at the Democratic National Convention that starts on Monday. Gill Studios, a company based in the Kansas City area that produces political literature, has been reportedly been caught producing Obama Bayh 08 bumper stickers:

Drudge Report is reporting that:

FLASH: Fri Aug 22 2008 17:52:03 ET /// KMBC’s Micheal Mahoney reports a company in Kansas City, which specializes in political literature, has been printing Obama-Bayh material… MORE… Gill Studios, would not confirm information about the material. They would not deny it either. At least three sources close to the plant’s operations reported the Obama-Bayh material was being produced…

Update: Several sources are reporting that Gill Studios is producing the material. 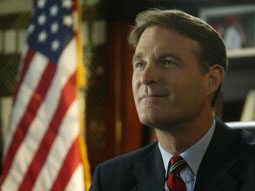 Senator Evan Bayh is from Indiana. Senator Bayh currently serves on five Senate Committees: Banking, Housing, and Urban Affairs, for which he is the Chairman of the Subcommittee on International Trade and Finance; Armed Services; the Select Committee on Intelligence; the Special Committee on Aging; and the Small Business Committee.