Republican candidates for the U.S. Senate have amassed more than four times as many Facebook Fans as their Democratic counterparts, and more than five times as many Twitter Followers, according to an analysis by HeadCount, a nonpartisan voter registration organization. 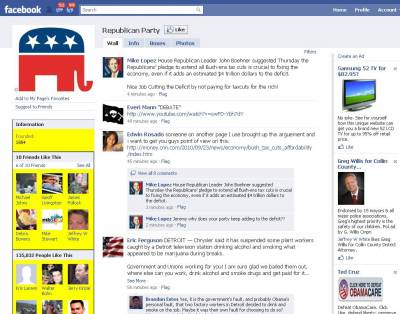 As of Sept. 21st, Republican candidates for the Senate had over 1.43 million Fans on Facebook, compared to just under 300,000 for Democrats. The differential on Twitter is even more striking, where Republican Senatorial candidates collectively have close to 520,000 Followers, and Democrats are just below 90,000.

Even when eliminating Arizona Senator John McCain and California Senate hopeful Carly Fiorina, Republicans who respectively have the largest number of Facebook Fans and Twitter Followers, Republicans are clearly making larger inroads with social media. Without McCain and Fiorina, Republican Senate candidates average 20,985 Facebook Fans, compared to 8,260 for Democrats. The G.O.P. averaged 5,891 Twitter Followers, compared to 2,591 by their opponents.

The full report, which lists social media statistics for all Senatorial candidates along with major political figures and musicians, is available at www.HeadCount.org/blog.

“We began by researching the disparity in social media activity involving musicians compared to political figures, to illustrate the point that music is a great tool to spur political conversation online,” said Andy Bernstein, Executive Director of HeadCount. “We then discovered that the gap between the parties was proportionately just as wide.”

Candidates associated with the Tea Party are clearly responsible for much of the social media activity, most notably South Carolina Republican Senator Jim DeMint. Hailed as one of the most new media savvy elected officials, he has more Twitter Followers than any incumbent and more Facebook Fans than any incumbent other than McCain. Across both parties, candidates in California and Florida have strong social media followings. In Florida Kendrick Meek has the third largest social media following of any Democrat nationwide, but he also ranks third in his own state, trailing Republican Marco Rubio and Independent Charlie Crist.

Still, none of the candidates have a social media presence comparable to musicians. HeadCount tallied the number of Facebook Fans of 25 of the artists that have supported the organization’s voter registration efforts. All had more Fans than any Senatorial candidate other than McCain. Kings of Leon, the artist in the group with the largest number of Facebook Fans with close to five million, has more than double the number of former vice presidential candidate Sarah Palin.

It would be a fallacy to say that Republicans have – across the board – shown more skill or creativity with their use of social media. Instead, their great popularity is more likely a reflection of grassroots support and enthusiasm within their core base. An examination of each candidate’s Facebook and Twitter activity found that members of both parties have found original uses and that no single pattern emerges. Here is a list of some of the more notable elements by particular candidates.

The former Hewlett Packard CEO, Fiorina’s Twitter page focuses mainly on photos from the campaign trail, appeals to her Followers to add a “Twibbon” to their Twitter avatars to show their support, as well as various statements regarding her opponent Barbara Boxer. Fiorina adeptly personally interacts with some of her Twitter Followers, replying to their Tweets and maintaining a dialogue with her supporters. Fiorina’s Facebook page opens up to a solicitation for donations. The most recent posts on Fiorina’s Facebook Wall are shots at her opponent Barbara Boxer.

Senator Boxer’s Facebook page initially directs users to a tab entitled “Act Now”. On this tab, Facebook users can donate, subscribe to e-mail blasts, share the Facebook page with their friends, sign up to volunteer, and visit the Barbara Boxer Campaign store. Her Twitter account contains statements regarding issue stance differences with her opponent, solicitations for donations, and links to news sources regarding the Senator and her recent activities.

O’Donnell, the Tea Party Republican candidate in the Delaware race, uses Twitter and Facebook to highlight Tea Party Conservative issues. Implicitly addressing her critics, O’Donnell tweets statements such as “We’re passionate, not wing nuts”, as well as repeatedly referring in a general way to the “issues that matter to Delaware voters.” As one of the most visible campaigns to the media and the American people, O’Donnell’s Facebook status updates tend to attract hundreds of comments. She nearly doubles her opponent’s (Christopher Coons) online supporters.

Rubio has a particularly strong Facebook presence, and on his Wall he emphasizes that he is running a “positive, ideas-based campaign.” He also utilizes his status updates to call Floridians to action, seeking volunteers to make phone calls to undecided Florida voters and to perform other campaign assistance as well as by soliciting donations. Rubio also embraces other platforms via Facebook, by providing a sign up page for his e-mail blasts, as well as a text message based campaign update system. Rubio’s Twitter updates are presented in a conversational and friendly manner, mainly addressing his day to day campaign activities as well as notable news articles and video links.

Meek’s Twitter feed is available in Spanish as well as English.

Crist uses Facebook and Twitter to specifically acknowledge Floridians he has met with during the campaign, as well as general pro-Florida messages, such as references to Florida’s NFL teams.

Giannoulias’ Facebook page is mainly focused on negative publicity regarding his opponent Mark Kirk, as well as appeals to Illinois Democrats to join his campaign. Giannoulias also directly engages his Fans on his Facebook page, with a post on September 5th encouraging Fans to post memories of their first time voting, in an effort to inspire first time voters in Illinois to get to the polls in November.

The page’s profile photo contains a message challenging supporters to help Paul achieve over 100,000 Facebook supporters. Paul utilizes the first person voice on his Facebook wall, constantly using words like “I” and “my” that convey the distinct impression that the candidate himself, as opposed to an aide, is making the updates. Paul’s posts generate fairly significant conversation, as most of his status updates are followed by hundreds of comments by Facebook users. His Twitter page mainly mirrors the content of his Facebook.

Carnahan’s Facebook page contains a tab entitled “Stop the Bull”, which contains a large graphic of the candidate with a few cows above the caption “Help Stop the Washington Bull.” On the same page is an embedded campaign ad video as well as a field that users can fill in to subscribe to e-mail updates. Carnahan engages her supporters directly by utilizing the Facebook Notes tab, wherein she composes e-mail messages to Missouri voters and allows the voters to reply and engage each other in the Comments section below each note.

Angle’s Facebook Wall and Twitter updates are very focused on removing Reid from office, with messages such as “14.4% unemployment in Nevada and what’s Harry doing? Pushing for amnesty for illegal aliens” and “just passed over $900,000 in our September to Remember fundraising goal. Help retire Harry Reid!” Angle’s Facebook page also contains a Video tab with a number of television campaign commercials with negative portrayals of the incumbent Senator.

Reid uses his Twitter to specifically counter negative messages offered by Sharron Angle, with posts such as “Angle’s extreme rhetoric surfaces again, says she wants to “take out” Harry Reid.” Reid’s Facebook page contains a “Donate” tab that allows users to make a credit card contribution to his campaign without being redirected off of the Facebook page. The Donate tab also allows users to see how many other people have donated online, which PAC they donated through, and how much each individual PAC has raised for the candidate.

Gillibrand is reaching out to young liberal voters and is working with popular celebrities on particular issues. Her Twitter page contains a recent tweet thanking Lady Gaga for her advocacy in attempting to convince Congress to repeal “Don’t Ask Don’t Tell” policies.

Rob Portman’s Facebook photo contains text beneath the candidate’s image encouraging users to send a text message to a five digit number in order to register for campaign updates via text message. Portman also pops up in some of the comment threads below his status updates. Unlike other candidates, Portman (or a staff member) appears to be monitoring the threads and fielding supporters’ questions.

Senator DeMint has a particularly strong online presence. His Facebook page proudly touts him as “America’s Most Conservative United States Senator.” As DeMint is fairly certain to win in November (the New York Times election site has his chances of victory at 100%), his Facebook page is nearly entirely devoted to issues and to endorsing Conservative candidates in other elections. Recent Tweets include endorsements of the Republican candidate in New Hampshire as well as Delaware’s Tea Party Republican Christine O’Donnell. DeMint makes extensive use of the Notes tab on Facebook, with lengthy messages on conservative issues addressed to his Fans, who tend to enthusiastically comment in the threads below the notes.